Tpas has been trying to get the voices and experiences of tenants heard as the Housing and Planning Bill progresses through Parliament. Last week we had two important meetings - one with Baroness Lister and one with Lord Best. Over drinks in the Lords' tea room we shared concerns about how the legislation will affect tenants and social landlords. 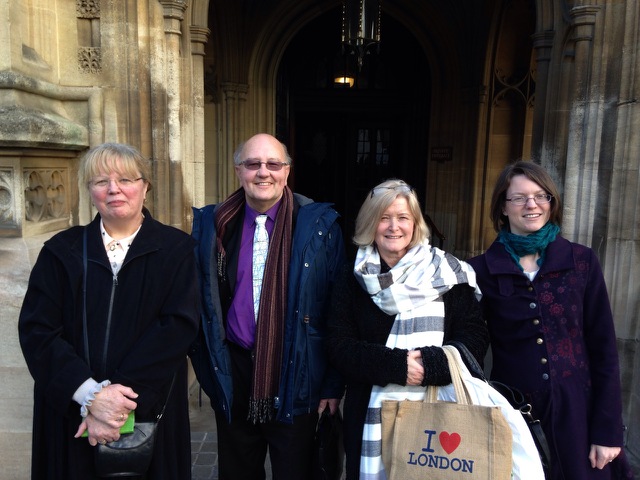 Tenants, (from left to right), Linde Carr, Chris Moody and Jan Sweeney were able to combine personal experiences with detailed understanding of how their landlords and communities work.  Their points were strong and many notes were taken. Jenny and I drew on comments made to us in person and on social media to reflect the wider voice of tenants.

We talked about principles but also about realities. We discussed house prices, household incomes and lifestyles; the impact of security on how you behave; the need for good maintenance and new development of social housing. We shared our sadness at seeing landlords' plans for investment swept away at a stroke, and our concerns about the future of Tenant Management Organisations.

'That's great but what's the point?' I hear you asking.

Firstly it felt good that Tpas could play a role in showing that the people affected by policies are real and can speak for themselves. It's so easy for lawmaking to be dominated by people who are paid to play a professional role, and that's just not enough to get good legislation.

Secondly, it might help to change something. The Housing and Planning Bill is being considered by the House of Lords throughout March. By debating, amending and negotiating with the government, the  Lords will try to influence what actually becomes law.

It's unlikely that the Lords will be able to stop these policies altogether but they may be able to scale them back and soften their impact. The debates in Committee will inform the amendments they ask the Commons to make. The strength of feeling expressed will inform how hard the Lords argue their point. The more they know and understand, the more they can do. We have seen this over the last week with the Welfare Reform and Work Bill as the Lords keep pushing the government to compromise on its planned reforms to measuring child poverty and paying Employment Support Allowance.

We hope to see mandatory Pay to Stay dropped and higher income thresholds for the voluntary scheme, security of tenure protected, and the number of social homes owned by councils retained. The Lords Committee is meeting through March and we'll keep Tpas members up to date on what happens.