Tpas have been appointed as consultants for the initiative which will help Muir residents have a greater say in how the housing association operates. The new residents body will work in partnership with Muir, strengthening the voice of tenants and offering greater influence over the Association’s business and service provision.

Tpas’ appointment has been welcomed by residents who have already become a part of helping to make the new shadow body become a reality. Sean Simpson, a Muir resident engaging with the project said: “Having Tpas working to help put this together is massive as they have more than 30 years of experience in making these types of groups a success.

“This body will be a voice for residents and we will be able to work in cooperation with Muir to make their housing service even better. “Residents need to grasp this opportunity with both hands and I welcome anyone who might be interested to accept the challenge and get involved.”

What difference a month makes! Since our last update, Muir has completed a very successful ‘awareness–raising’ and recruitment campaign to the National Residents Group (NRG). They used a combination of;

As a result of this campaign, over 400 information packs were sent out. This is a very positive response and shows that Muir residents are interested in being involved with their landlord.

The NRG will be part of governance at Muir Group and it should be acknowledged that the role and responsibilities may not appeal to all residents. But the fact that residents are curious about involvement with their landlord provides Muir with a solid foundation upon which to build their wider engagement with individuals and communities. This is something Muir is keen to develop alongside the certain of the NRG.

Tpas Associate Jackie Grannell, who is leading the project, has also been to the Muir Group Board meeting to discuss with them how the NRG will fit into the governance arrangements.

"The meeting with Muir Group Board was very positive", said Jackie. "The fact that the NRG will be a sub-committee of the main board and will have delegated powers is a measure of the confidence they have in this new structure. The Board is expecting the NRG to provide them with assurances that the Consumer Standards are being to delivered to all Muir residents".

So what’s next? The next major task is to complete the interviews and select the 12 residents who will become the National Residents Group. Tpas will be supporting the interview panel during this time as the ‘critical friend’.

Our work with Muir Group is really moving fast…and in a good way. We are working with the Shadow Residents Body (SRB) whose remit is to ensure that the recruitment to the newly proposed National Residents Group (NRG) is successfully completed by June 2018; they are also helping to design and review the governance documents for the NRG.

We have worked tirelessly over the past 6 weeks to develop the very important Terms of Reference and Person Specification for the NRG. This is not the most exiting of tasks but the SRB’s enthusiasm, professionalism and good humour has meant that we have now agreed these key foundation documents for the NRG.

We are now working on the how to ensure that Muir residents are made aware of these new proposals to create a residents governance model and that we can encourage at residents to apply. It’s still a work in progress but the big push begins on 1st May 2018 when Muir ‘go-live’ with their communications to all the residents. 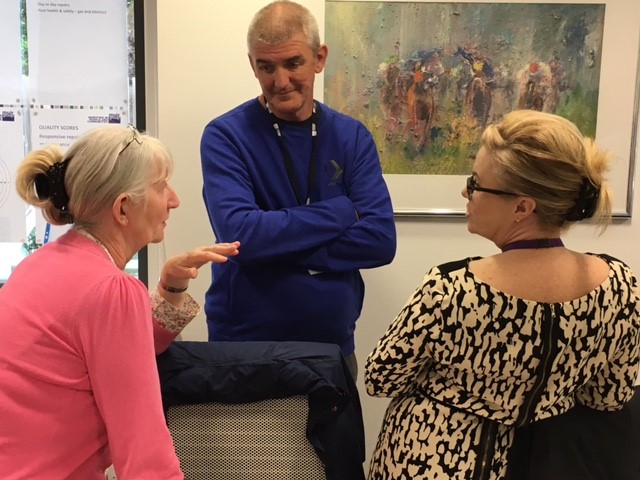