An open letter to the Lords 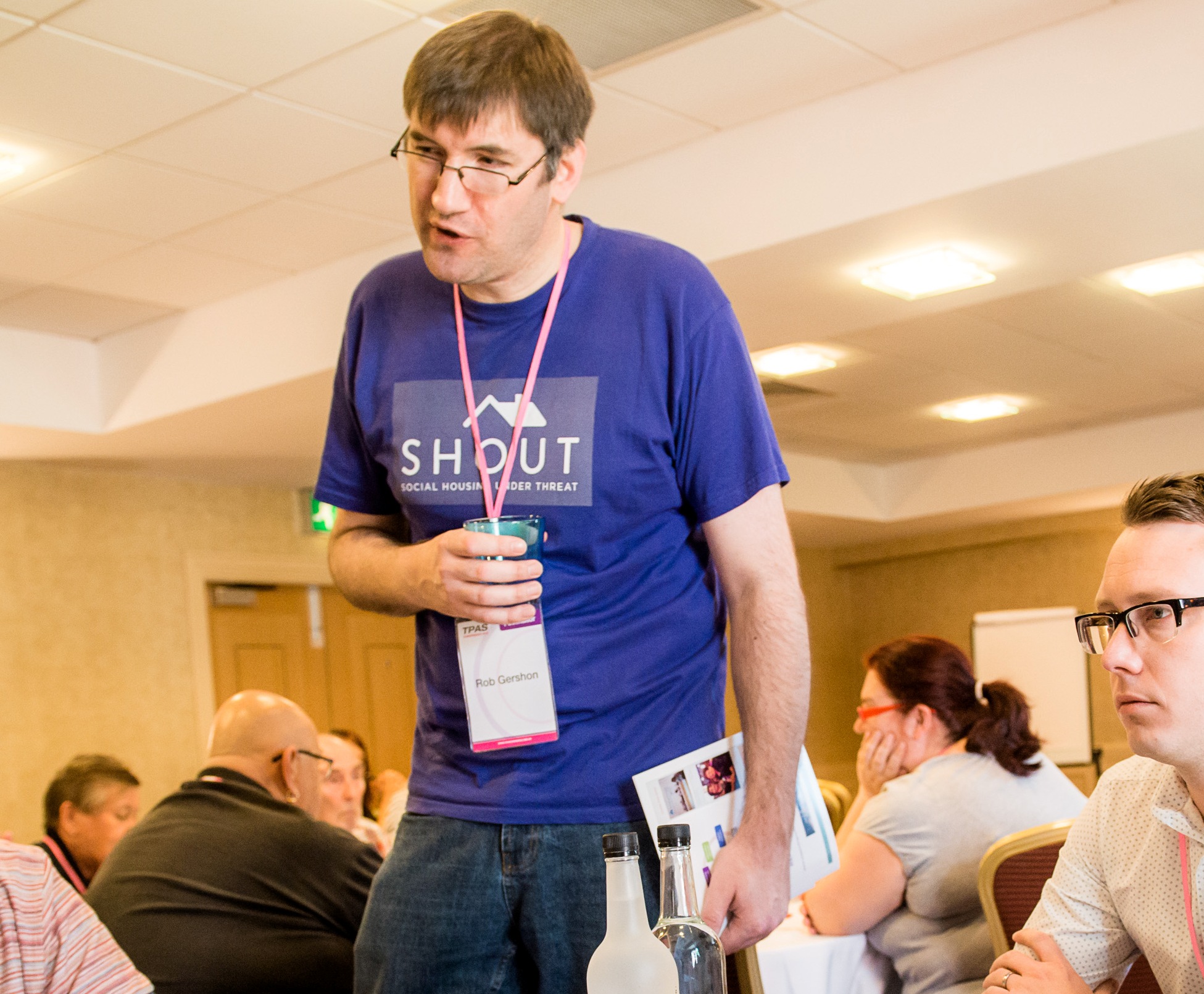 Rob Gershon, a regular blogger for Tenants View, shares his experience of working with a number of residents to lobby the lords on the Housing and Planning Bill.

"As the Housing and Planning Bill made its somewhat tortuous route through the House of Commons and the House of Lords, the sticking points were reduced to a handful of key issues on which Peers in the upper house thought that a few more changes were needed.

These included a number of clarifications over what decisions could be made locally about Starter Homes, the mix of tenures that are required from replacing homes sold to fund the extended 'right to buy' for housing associations, a couple of amendments about homes being resilient against floods and carbon compliant, and the right of appeal for local residents over what is in their neighbourhood plans.

Each time Lords' amendments ended up back in the House of Commons, they faced a stony reception. Although though there had been concessions and alterations on many issues, the substance of those remaining had not got any conversation going in the Commons.

As if to reinforce this idea, many of the amendments were sent back to the Lords under 'financial privilege', which normally means no further discussion is allowed, and the house of Lords should relent and allow the Bills to pass.

Lord Robert Kerslake had proposed amendments to Starter Homes and on the sale of council houses to fund right to buy. Lady Parminter had proposed those on ecological issues and the 'right to appeal'. As the dealine for getting laws passed by Royal Assent drew near, they each risked delaying the Housing Bill so long that it wouldn't get passed.

In refusing to back down in the face of financial privilege, Lord Kerslake was attracting what he described, on the final day of debate in the Lords, as 'fireside chats' – other, more established peers suggesting that resisting the constitution could have negative affects for the relationship between the two Houses.

Although I wished I'd thought of it much sooner, I realised that I wanted to somehow show support for the defiance of Lord Kerslake's and other peers who'd been trying to change the Bill to make it less damaging. It had been in the House of Lords that most of the fighting had been done in terms that I could understand, when peers talked about “communities” and the people who lived in homes inside them.

I thought I'd try and write an open letter, and get other people to sign it. I didn't envisage it would be many people, and I dreamed that it might end up in the pages of The Guardian for maximum exposure, but in the end the number of people and where it got published were almost secondary.

As the Lords stood to debate the outstanding amendments, Lord Kerslake mentioned our letter. He had already conceded his amendment about allowing local authorities to choose how many Starter Homes get built, but when it came to ensuring that councils had the power to build social housing from their forced sales, it was clear he wasn't going to give way. I'd been watching all of the proceedings in both houses up to that point, and I thought he looked tired, and certainly resigned to his decision rather than looking forward to announcing it.

I felt a little bit guilty. Here was a man who'd attracted a great deal of poiitical pressure, even though he is a cross-bench peer and not affiliated to any party. Although he'd only been a peer for about a year, here he was acting on his convictions and his considerable breadth of knowledge about Housing. Here he was, and it felt like The Letter had had the effect we wanted, and helped to galvanise Lord Kerslake into one last attempt to give communities some power – a genuine shot at localism.

How The Letter came to be

I had been having a number of direct message conversations with different people on Twitter about various aspects of the Housing Bill. My live-tweeting of the events had earned me an extra follower or two, and some of us had been speculating how the Bill would turn out, or whether it could be improved to make it less clumsy, or to centre less power in London when so much of housing is done locally.

I should point out that not all the signatories were tenants in social housing! Some are residents' associations of home-owners, concerned about their right to appeal neighbourhood plans. Some were affiliated to residents' groups, but their interest lay more with the carbon compliance or flooding amendments. Some were part of a tenant group, but had signed for themselves. I hadn't given anyone much time to consult other members of their groups.

It's fair to say that although we'd come together to sign a letter asking for further consideration of the Housing and Planning Bill, we certainly don't agree about other things, with topics like tenant involvement and NIMBYism creeping out of the individual conversations I had with people and into the broader shared direct messages. The upshot being that although we all see and do things differently, addressing the injustices of the Housing Bill was something we could all agree on uniting over.

I brought together a small core of the signatories – four or five other people – to look over the draft of the letter. I'd tweeted Dawn Foster about placing it on the Guardian, and although I thought I was being much too unreasonable to ask at such short notice, she agreed to have a look over anything we produced to determine if it might fit in Comment is Free or the Guardian Housing network.

I tweeted, late on the Monday night when I'd had the idea, to see if there were any tenants or residents' groups who'd be interested in being co-signatories, and had a few late-night respondents. By the time late Tuesday morning had come about, I'd had a lot of conversations. Some were from people who wanted to support the letter, but felt that they couldn't back its rather neutral tone about particular elements, like Starter Homes, and personally I wanted to agree with them.

Some thought that the tone more generally should have been more insistent, and I agreed that this was the case too, personally. In the end I turned down a couple of signatories, not because I didn't agree with them, but because The Letter was dealing just with the realistic potential of the remaining amendments over which the House of Lords insisted.

We could have made more general points about the Housing Bill – indeed, this might be something we yet produce, but the purpose of the letter was to promote and galvanise whatever resistance to the Bill could be mustered in the Lords, before the last set of votes happened. In the end I reluctantly asked one councillor if they'd mind if I took their name off the list. His support was greatly appreciated, but it changed the shape of the co-signatories in the end, as the rest of us were not signing for political loyalties. Neither was the councillor, but it felt at odds with what the letter had become – something from the people directly affected by the remaining bad bits of the bill..

Along the way, we had a little bit of celebrity housing advice. Leslie Channon, recently appointed to the Tpas board, got us some pointers from Danny Dorling about how to publicise it. I had a couple of phone-calls with people I respect greatly in the housing world. We mulled over whether it was the sort of thing that should have the backing of more established campaigns like SHOUT, but on balance this would have detracted from what it was: A group of people who are members of various communities, coming together to express our need for someone to stand up for us in the face of what is recognised to be one of, if not the, worst Housing Bill that has ever passed.

I sent the letter to Dawn Foster, who very kindly read it over but felt it wasn't quite right for the Guardian Housing Network. This was disappointing for us, but completely understandable. The Letter didn't really have a message criticising the Bill, and nor did it seek to come up with any alternative policy suggestions. The co-signatories do all have these kinds of ideas and suggestions, but the letter didn't feel like the platform for them.

In the end, 24housing agreed to run the letter, and it was sent to a small number of peers who had been particularly active in seeking to protect individuals and communities. Even this avenue was kept to a small number of people, as I worried about flooding the email addresses of different peers with the same email – something that will often get correspondence and correspondents ignored completely.

At the end of the day, I think we achieved what we wanted to. We'd never thought about the letter being mentioned as part of the Housing Bill debate in the House of Lords, but it formed part of Sir Bob's introductory speech as he moved for one more vote on his amendment that sought to give local authorities the right to make a case to the Secretary of State to use money from council homes sold to build more council homes.

I felt a degree of elation, but also a slight guilt that I might have added a pressure, however small, that might have influenced Lord Kerslake's decision to make himself persona non grata with peers concerned about the constitutional dangers of the Lords defying the Commons. There was also a sense of disappointment, as the other amendments that we supported as signatories were each removed during the course of the debate.

The Bill went back once more to the Commons, with the final amendment, accompanied by the mention of our letter enshrined in Hansard, debated the following day by MPs. Predictably, the Housing Minister chose not to speak about the critical issues of how councils and communities can plan for and build the homes they need. Instead he focussed on the fact that the Commons is elected and the Lords are not, and that the will of one should win out, whatever the facts of the debate are.

Lord Kerslake chose not to push the amendment again. By now, even I didn't see the point in contesting it any further. The co-signatories decided to stay in touch, and to keep co-operating on challenging whatever the Housing Act brings next. I can't speak directly for the others, but for me it was a reminder that there's a lot of value in talking to and collaborating with other people who are affected, or who are going to be affected by, bad housing policy. Watch this space, I guess".

Click here for more information about SHOUT for Housing